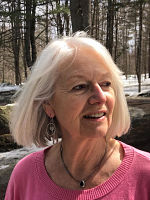 Rai d’Honoré is a modern-day troubadour and scholar of Occitan culture — a progressive and egalitarian society in the Middle Ages. She received her doctorate from the Catholic University of America and has been on the faculty of US and international universities teaching French, Spanish and English languages as well as literature, history, film, politics, and western civilization. For several years, she lectured on the troubadours at Eastern Carolina University’s Fletcher School of Music.

In addition to giving performances on the troubadours at universities, conferences, festivals and on television in the US, she was recently featured in a program on French 3 television about her CD, Pretz e Paratge. The CD is an exploration, in prose and original compositions, of the brilliance of Occitan culture and its destruction due to the Albigensian crusade.  She is currently working on a presentation in poetry and song of Esclarmonde de Foix.