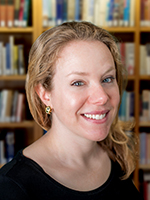 Rachel Barenbaum‘s debut novel, A Bend In The Stars, was just released by Grand Central. It is set in 1914 Russia and tells the story of a scientist racing Einstein to prove relativity. When the scientist goes missing, his sister, once of Russia’s first female surgeons risks the firing squad to find him. She faces war, love and chaos as she searches for him – and for a way out of Russia. At every turn, antisemitism and hunger threaten her way forward.
Rachel is a graduate of GrubStreet’s Novel Incubator. She is a prolific critic for the LA Review of Books and DeadDarlings. In a former life she was a hedge fund manager and a spin instructor. She has degrees from Harvard in Business and Literature and Philosophy. She lives in Hanover, NH with her husband, children and dog named Zishe – after the folk hero who inspires many of their conversations.