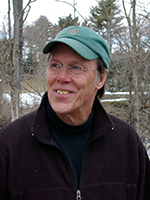 Geoffrey Douglas is the author of five nonfiction books and more than 100 magazine pieces, many of them widely anthologized.  A former reporter, editor, columnist, and adjunct professor of creative writing at the University of Massachusetts, he has been a fellow at the Bread Loaf Writers Conference and a writer-in-residence at several universities.

His latest book, The Grifter, The Poet, and The Runaway Train  is a compilation of his stories in Yankee, written over the past 20 years. Some recount public events, widely reported: a Maine town turning against itself under the weight of an influx of Somalis, a fatal fire in Worcester MA.  Most are more private, the stories of men and women surviving, facing choices, living life: the lucklessness of a small-time jockey; a police chief’s moral dilemma; a poet’s love affair with his town. If there is a single theme linking them all (other than the New England region), it is the simple, undressed grit of those involved.