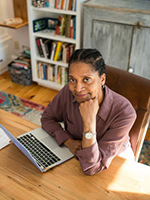 Emily Bernard discusses the essays in her new book, Black is the Body: Stories from My Grandmother’s Time, My Mother’s Time, and Mine. Where do good personal essays begin? What is the line between our stories and the stories of others? Why write personal essays at all? Emily will answer these questions as well as read from her new book, which has been praised on WBUR’s “On Point” and NPR’s “Fresh Air,” and in People.com , the New York Times, O, The Oprah Magazine, Publisher’s Weekly, and Kirkus Reviews.
Emily’s previous books include Remember Me to Harlem: The Letters of Langston Hughes and Carl Van Vechten, which was a New York Times Notable Book of the Year. She received both her B.A. and Ph.D. from Yale University. Emily Bernard is the Julian Lindsay Green and Gold Professor of English at the University of Vermont in Burlington.