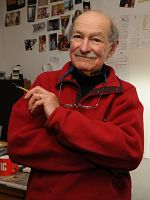 Edward Koren is author of Koren, in the Wild, an award-winning collection of cartoons.

Best known for more than 1100 cartoons published in The New Yorker magazine, he has also contributed to many other publications, written and illustrated children’s books, and illustrated many more.

The recipient of the 2019 IBPA Benjamin Franklin Gold Medal Award for Humor, In the Wild was published by Button Street Press. The cartoons, featuring his signature humanoid and fuzzy characters, have Vermonters looking at city folk, and city folk looking at Vermonters.

A former New Yorker and a Vermont resident who has served on the Brookfield Vermont Volunteer Fire Department for more than 30 years, the two states intertwine in his work.

A self-proclaimed contrarian, Koren’s curiosity and astute observations feed his work. In his presentation, Ed talks about the spark of inspiration behind many of his cartoons.