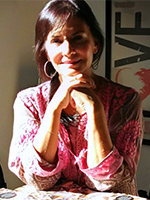 Join writer Cherise Wolas as she discusses and reads from The Resurrection of Joan Ashby, her acclaimed debut novel that follows a brilliant literary sensation of dark and explosive stories, into unexpected marriage, unintended motherhood, and a Shakespearean betrayal that forces her to question every choice she has made.

Called a “powerhouse debut” by Entertainment Weekly, and “a dazzling universe we don’t want to leave” by Huffington Post, Joan Ashby, aNew York Times Editor’s Choice, an Indie Next Great Read, longlisted for the 2019 International Dublin Literary Award and the 2018 PEN/Bingham Prize, was also named a Best Debut, Best Novel, and top 10 novel by various outlets, including Kirkus Reviews and Booklist. The Family Tabor, Wolas’s second novel, “a piercing and multilayered portrayal of an accomplished yet deeply troubled family,“ (Publishers Weekly) and a “pitch-perfect hypnotic generational saga” (Chicago Review of Books), has been optioned for a multi-season cable television series by Legendary Entertainment.