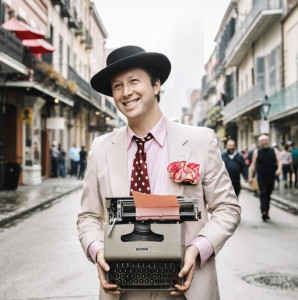 Benjamin Aleshire is an artist based in New Orleans. His writing has recently been published in The Times of London, Boston Review, Iowa Review, and Smartish Pace—and he has been featured on television in China (SinoVision), Spain (Telemadrid), and the U.S. (WGNO-New Orleans). He makes his living as a poet for hire in the French Quarter, writing poems for strangers on a manual typewriter, and touring widely.

Ben will write a poem for you. Pay him what you wish.