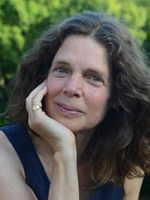 Jody Gladding is a poet, translator, and site-specific artist. She has
translated more than forty books of French literature, and her own
writing has appeared in two limited-edition chapbooks and four
collections: The Spiders My Arms (Ahsahta, 2018), Translations from
Bark Beetle (Milkweed Editions, 2014), Rooms and Their Airs
(Milkweed Editions, 2009), and Stone Crop (Yale University Press,
1993), chosen for the Yale Younger Poets series by James Dickey.

She has taught at Cornell University and in the MFA Program at Vermont
College of Fine Arts, and is now directing the Writing Program at the
Vermont Studio Center in Johnson, Vermont. Her awards and honors include
MacDowell and Stegner Fellowships, and a Whiting Writers’ Award. Her
work explores the places where language and landscape converge.